A Collection of Artwork by
Jacqui Lieber-Burnley

I was born in London after the World War Two .My love of painting and drawing started at a very early age, at primary school where the easel and bright colours that dripped, down the white paper, attracted me so much. On the way home from school I would pick the wild flowers, find out their names and press them ,keep them in a book, and I was fascinated by the beauty that exists in nature. I started to teach my self oil painting from an easel and oil painting kit and book , which I received from my sister. I took art at an advanced level in school , and later entered Twickenham College of Graphic Design and Technology for a foundation course.
I was too emotional and headstrong to do anything that the teachers had planned for us. However I used the time to paint my own still life paintings, make sculptures from re-cycled objects, thrown away and discarded,at local dump, and when asked politely to put my work through an "experience" I set it alight and handed in the ashes.
All this would be accepted now, but back then I don't think it was really appreciated.
The emotions , I was experiencing during my quiet painting times, using bright colors, were in fact, a response to my "unspoken secret "background, a daughter of a Holocaust survivor,who fought bravely on the British Army, having escaped Germany, in fact Berlin in the years running up to the outbreak of World War Two.
My practical side decided to leave the commercial art school, and seek training and an education degree as a teacher, where all my interests and love of teaching could be harnessed.
Later I found the beautiful medium of Chinese Brush painting , which led me to a thirty year journey from Harrow Arts Centre for a short course, to the Beijing Academy of Fine Arts,where a group of us stayed for three weeks and ate slept and drank, the work of the Masters. Thereafter I spent many years teaching scores of adult students the beautiful mindful calming brushstrokes. Then we spent our days practicing the craft for decades.
When in 2007 I came to live in Israel, I was introduced to a pottery studio near Jerusalem, and there my friends and I spent three years learning some ceramic techniques. For three years I attended a weekly studio sessions with other artists and potters. I made a series of Biblical figures in that time,which can be found on the website. 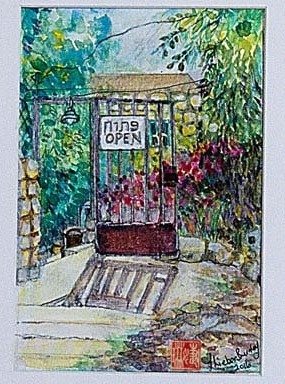